To topple an “ally”

Her agreeing hhhmm sounded hollow, almost fading. She discretely rushed it past my point towards hers. “Sure. I mean, yes. Of course…” She cupped her drink the way one holds their breath right before uttering a word that completely dismisses the understanding they claim to have. One last sip, for emphasis. “But, the most important thing is that this city finally gets its first statue of a Black person!” Her exclamation point presented itself as an empty glass firmly planted on the table under her now crossed arms and my air piano-playing fingers. Undistracted from the Monk tune I was tapping, I informed her that, in the process of decolonizing, one doesn’t unpack justice in one single peel. To say it doesn’t matter who sculpts a statue that represents Blackness is to claim that it’s not important who tells our stories. It also suggests, and perhaps this troubles me most, that if white artists portray Blackness in their work they no longer have to burden themselves with the moral obligation to not just make space… but perhaps, and ever so silent, sometimes leave the room altogether.

I was reminded of this and many similar conversations about statues in Dutch public spaces when my Instagram and Twitter timelines buzzed with the news about Bristol’s latest monument. On the same spot where, days earlier, the image of a colonial terrorist was snatched off its pedestal there was now a towering image of a Black woman. When this first came to my attention, I hoped the new statue was the work of the Black British artist Thomas J. Price. Before I clicked on the post that would reveal the image of the statue, I took a moment. I took one of those “please, pleaaase…”-soaked moments where, before you open that e-mail or rip the wrapping paper, you hope that a dense enough manifestation of your desires will somehow affect what you’re about to see. I hoped for Price because I longed for the freedom he grants the realities he monumentalizes, I longed for a liberation from the gaze of artists whose imagination of our strength limits itself to the spectacle of our resistance. I wanted to see a woman who, if only for a split second, didn’t have to heavy her bones with the need to convince someone of what she already knows.
As I enlarged the image between my fingers I figured that this wasn’t the work of Price. Which, for me, would have been fine if the magnitude of the momentum, the impact of having the image of Black Lives Matter-activist Jen Reid replace that of a colonial terrorist, was at least held by the hands of a Black sculptor.  It needed to have been a Black sculptor. The attention that is now given to a white artist, whose understanding of our liberation movement is limited to the calculation of how it can serve him, would have moved mountains for Black British artists.

Those who consider the claiming of space a “Survival of the fittest”-type of issue, will probably claim that this is simply a matter of whoever comes first, is first. Simple as that. In situations like this, I personally care nuffin’ about being first. It’s easy to be first when the only thing at risk is the relevance of your portfolio and when you don’t have to worry about the financial and material means to pull off a stunt like this. 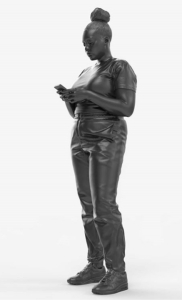 And I truly hope that the analyses of what we unpack create spaces for (re)imaginations that centre decolonial Black artists who craft images that are reflections and not interpretations of us. We owe this to ourselves, to who we know we are. And yes, we owe this to artists like Thomas J. Price who, in very clear terms, speak out against colonial hijackings ánd, to not add to our burdens, urge Black artists to not answer opportunism with haste.

(This picture is an example of Thomas J. Price’s work. I borrowed the image above from his Instagram.)

Posted on July 24, 2020, in Imagery and representation. Bookmark the permalink. Comments Off on To topple an “ally”.