I have the luxury of being surrounded by brilliant Black women whose creations put fire in our steps and pepah in our speech. Makers and organizers. Sisters who’re stomping through the unruly rubbish of privilege and comfort while striding towards social justice, making sure that we’re not just standing on the shoulders of giants but we’re also setting up battle camps and sanctuaries in their footsteps. Even in the company of such illuminating workers, filmmaker Bibi Fadlalla stands out as one of the realest, one of the truest. As I wrote on The Gram: “She’s a film maker doing it for the culture instead of the clicks, doing it to reflect instead of to be seen. Her lens is one of the most amazing mirrors that ever represented Blackness in the Netherlands.” With her new series #BlackInNL Fadlalla affirms the importance of having our histories and realities documented by someone who isn’t just fascinated by our experiences but who also shares the, who lives them. 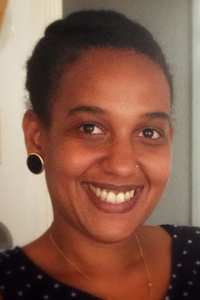 On June 23 2016, Fadlalla (pic) uploaded the first episode of the series that will de- and reconstruct the contemporary narratives about Blackness in or affected by the Netherlands. With #BlackInNL she creates conversations that are public yet unbothered by expectations of how and when Blackness should enter the stage. She creates with the freedom of those who understand that ‘dialogue’ often means ‘delay’ and that the B in our follow up plan stands for Black. By finding a proper balance between liberties and responsibilities and while connecting our individual to our collective Self, she plays a massive part in us retaking matters into our own raised fists. That she invited human rights expert Nawal Mustafa and PhD researcher Tracian Meikle for the first two episodes, makes one thing very clear: we will be represented in our full dimensionalities. Both ladies have made and continue to make stellar contributions to the collective well-being of Black people in the Netherlands. Digging through archives, attending events, mobilizing people. Neither of them ever did it with their eye on the mic but it’s such a joyful kind of justice that they are the ones who’re introducing us to this new series.
Plus, Fadlalla’s list of people she wants to interview for upcoming episodes is so refreshing. It reflects that what some of us have so desperately been fighting for: a proper representation of the NL-based Black communities. One that takes us far beyond the shortlists of some of our most prolific organizers, one that offers an understanding better than the best coffee dates with those who’re seen as in-crowd.

If more people who claim to be in the business of (re)telling the histories of NL-based resistance movements would do so from the community archives instead of from in front of a big mirror, Fadlalla would have gotten the credit she deserves a long time ago. Part one and two of her documentary Zwarte Piet en Ik (Black Pete and I) first aired on Dutch tv on December 1 and 8, 2012. This is long before the latest wave of Saviors and others invested in the intellectual gentrification of Black resistance discovered that the anti-racist struggle is an excellent stepping stone towards relevance. Her work should have earned her a spot at the tables. Proper tables in the houses that we built, not those burning pieces of furniture scattered around decaying ivory towers held together by colonial nostalgia and sanctified aspirations to never ever upset the status quocasian.

Luckily her drive to create offers ample opportunities to get it right. #BlackInNL isn’t just what we need, it’s how we need it: honest, free and Blackity Black. So instead of live Tweeting during all the mainstream TV shows that don’t get us or creating hashtags urging them to invite one of us on their show, use your energy to amplify the work of those of us who actually have us in mind when they create.  Be on standby for next episodes that will feature Amsterdam based activist Jessica de Abreu and plenty, plenty mo’ good people.

Dear Bibi, thanks for all the excitement you continue to offer!

Posted on July 20, 2016, in Afri-/Afrodiasporic communities in the Netherlands, Imagery and representation. Bookmark the permalink. Comments Off on #BlackInNL.