With the drugging of our Ethiopian Sisters in the Israeli transit camps Israel has very much declared a war against Black people. All politicized euphemisms and Western blindness for Israeli terrorism aside… telling women they’re getting inoculations while you’re in fact shooting birth control up their bodies is nothing short of forced sterilization. This horrific violation of medical ethics and human rights needs to be on the worldwide radars of politics, Black feminism, Pan-Africanism and all bridging territories. Also, both Europe and the USA need to stop Supernanny-ing Israel.

And no, I absolutely don’t believe that the medical cocktails the women were given ‘only’ contained birth control. The Israeli government expressed a lot more hatred with a lot less discretion so let’s not underestimate how serious they are when it comes to ‘protecting their own’. Their wars against The Other are infamous and until the Western media emancipates itself from its race and religion driven subjectivity we can’t allow ourselves to become casualties of their 6 o’clock news. Let’s be very aware of who we’re allowing to influence our ideas about hierarchies of relevance and/or oppression.

Comments Off on Israel’s war against Black women 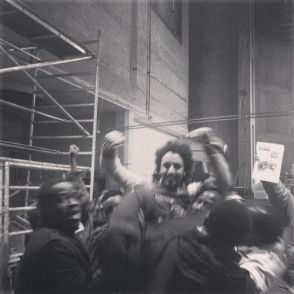 As soon as the front door opens they surround him, hug him, pick him up and he, carried on both their shoulders and prayers, surfs his way through the building. It has been six weeks since he saw his comrades, six weeks since the Dutch government decided that his quest for safety earned him a spot among criminals. Jails ain’t shelters and ‘housing’ asylum seeking Brothers and Sisters in institutes built to lock up killers and rapists goes against every form of humanitarianism the Netherlands likes to associate with itself. Or at least it should…

I recognize him from one of the posters with the summarized stories of those who were jailed or deported. His name, El Mouthana, is frequently featured in my Brothers’ narratives about the casualties of politics and the importance of collective visibility. Both their protest songs and their silences illustrate that war is so much more than a series of hollow headlines serving Islamophobic propaganda the West likes to call ’(inter)national security/safety’. The stories have faces and his is one with character and a moustache, eyes tired of questions and a radiant smile without answers. The Brotherly Parade passes us and for a second our eyes meet. Mine are scanned by a glance that, blurred by emotions, is hunting for familiar faces. I’m sure he doesn’t see me.
(Amsterdam/ January 14, 2013)

El Mouthana is one of the 100 asylum seekers who’re staying in De Vluchtkerk, a church turned housing project in Amsterdam (the Netherlands) that provides a temporary stay for Brothers and Sisters from East and West African countries like Somalia, Sudan, Ethiopia, Eritrea and Côte d’Ivoire. They can stay there until March 31st 2013. After that? Nobody knows… I truly hope some of my fellow writers (especially those based in Holland) will donate a few moments of their time and craft to the proper documentation of this horror story and to help raise the awareness it deserves.

Comments Off on El Mouthana